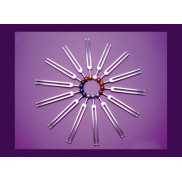 "Immediately I saw this new form of muscle testing in action I sensed straight away that it was of enormous significance and importance to the future of Kinesiology - it was after all that time the "Quantum Leap" I had been waiting for.

This way of observing the muscles neurological feedback mechanisms in Dynamic Motion which is the essence of Cyberkinetics has far reaching consequences which I was not even able to think of when I first applied the Analogue testing principle - This new development has been defined by Alan Sales with his unique terminology being the muscles "Cyberkinetic State".

The results I achieved with Analogue Muscle Testing exceeded everything I expected. I was so amazed that I almost could not grasp it.

Radical innovations, as experience shows, do not take place very often but I can safely say that Analogue Muscle testing is one and it does not compete with any of other existing methods which have already proved their value.

The practical uses of it are far reaching and might well have a big influence on how Kinesiology as a whole will be practised in the future. The method is easy to implement and has shown tremendous benefits and can be utilised immediately in any form of Kinesiology protocol."

"I have been using Alan Sales modality concept for several years in Kinergetics workshops and have found it to save a huge amount of time by accessing the major priority. I use the Modality Mode to access the Priority of all the Priorities in one go giving me the direction in which I should be working.

Because of the enormous benefits of saving time and the speed and accuracy which go with the application of using Modality it has been incorporated into Kinergetics 7 workshop as an advanced technique.

Over the years Alan has shown me many of his new advanced techniques and I have been very impressed with his research. He is certainly one of the great new innovators in Kinesiology today and I look forward to learning and teaching some of his workshops in the future."

"I was first introduced to the concepts of Modality Mode and Analogue Muscle Testing when their inventor/discoverer Alan Sales was a student in one of my workshops. A brief demonstration of the Modality Mode convinced me that this was a seminal discovery in Kinesiology similar to Alan Beardall's discovery of Priority Mode many years ago.

Modality Mode appears to allow the "body's innate wisdom", its knowledge of the true "causal factors" involved in an imbalance, to be expressed even more fully than with Priority Mode. Modality Mode allows the monitor to differentiate the "true" causal factor or factors from other highly compensated imbalances.

While Binary muscle testing accesses the conscious-subconscious circuits controlled by the Frontal Cortex-Basal Ganglia-Thalamus, Analogue Testing appears to access the totally subconscious circuits controlled by the Cerebellum-Thalamus. These cerebellar circuits may contain quite different information than the more usually tested binary circuits, which until the invention of Analogue Muscle Testing remained "hidden" to Kinesiologists.

I feel we are now only looking at the newly discovered "tip" of the iceberg that lies beneath and is only accessible through this marvelous new type of muscle testing. The next few years, as a full understanding of Analogue Muscle Testing is developed, should prove to be an exciting time that may well change how Kinesiologists work."

Dr. Charles T. Krebs
Applied Physiologist, Founder & Developer of LEAP, and
author of A Revolutionary Way of Thinking. From a Near Fatal Accident to a New Science of Healing --- January 2001

"Cyberkinetics has without a doubt had a dramatic impact on my Kinesiology practice like nothing else since Touch for Health ---
it is simple and yet so powerful at the same time.

It is the only Kinesiology I know which truly releases the practitioner from following set protocols which impose a standard treatment on an individual basis.

As a result it has allowed me to be more dynamic and flexible in my approach and to get to places in the treatment of my clients that I would never have dreamt possible.

It is superbly quick and efficient at identifying the core of the problem which I need to deal with in my balances --- It wholly deserves its description of a "Quantum Leap in Kinesiology" in my view. "

"My first experience with Cyberkinetics was during the International Kinesiology Conference held in Zürich, in September 2000 at which Alfred Schatz talked with his greatest enthusiasm about new ways of muscle testing. It was so clear to me at that moment that I was not just listening to an interesting subject, but to a real breakthrough!

In spite of this I was surprised to notice in the following few days how little of this groundbreaking presentation had been actually absorbed by my kinesiology colleagues there present. Many seemed to have missed the message completely.

It therefore appeared that the concept of muscle testing indeed was something that many took so much for granted, to the point of being unable to consider other ways of doing it, even after they had actually seen the demonstrations of the new techniques in Cyberkinetics themselves.

I decided there and then that I wanted to know more about the concept and what I had seen and after meeting Alan Sales and studying with him, I started to promote and teach Cyberkinetics from that first impression which remained with me.

Letting students learn and apply the Analogue Muscle Test (or a Non-Binary Muscle Test, anyway) takes patience and understanding, because for a kinesiologist it really means looking with brand new eyes at a picture that had been previously taken for granted for many years.

So I am extremely grateful to Alan Sales for having been so open and brave while investigating this original point of view and for sharing these newly found gifts with other kinesiologists. The importance of these new ways of testing has now become part of my clinical experience, and I have realized how much of a difference that its addition to my knowledge can make in the end to my work.

These 'extra windows' through which a kinesiologist can look at the client are for me invaluable and inestimable in worth. Their efficacy is so evident in many ways, for they put you in contact with really new aspects of the person being treated.

In my opinion being able to use the Analogue and Cyberkinetic Muscle Testing should be a must for any kinesiologist, otherwise they are missing out on so much new information, without even realising it.

There are many different ways in which Alan's work has improved the efficacy of my own therapies and also of the therapies of my colleagues with whom I have in turn shared this new knowledge.

I do hope that the concepts of Cyberkinetics spread more and more among all the kinesiologists around the world for the benefit of all our clients."

"Alan Sales has perfected a whole new set of innovative ideas in the field of Kinesiology and it is probably true to say that his contribution is the single most revolutionary and powerful set of tools for several decades.

Analogue Muscle Testing and Modality Mode offers a whole new paradigm that has never before been available to Kinesiologists.

This no-nonsense approach gives a Kinesiologist cutting-edge technology being free from lengthy protocols and complicated serial test procedures. It is not only non-subjective but it also cannot be contaminated and is totally receptor driven.
Simplicity and precision are the key aspects of this wonderfully direct and at times awesome diagnostic resource. Anyone using these skills will find that it seeks out, finds and brings on-line the priorities of all priorities in minimal time.
The simplicity of these new techniques is almost baffling and one could be forgiven for thinking that it is too simple.

Alan Sales has indeed pioneered a great Quantum leap forward in the field of Kinesiology and Complementary medicine. His logical engineering mind combined with openness to all possibilities of lateral thinking have led him to probe and enquire into the depths of current Kinesiology concepts resulting in this wonderful new way of looking at the Human biocomputer.

His innovative ideas and discoveries are without a doubt now contributing to the magnificence of Kinesiology therapy worldwide. "

"Cyberkinetics is a dynamic technique whose beauty is in its simplicity and it can do nothing but enhance all solid groundwork in Kinesiology and Touch for Health.

I feel so privileged to have been involved in such a groundbreaking and pioneering workshop - I feel blown away and extremely excited by what I have learnt.

After seeing Alfred Schatz present it in Zurich last year I found Analogue Muscle testing so riveting I had to see it again presented by Leila Turner at the Touch for Health Kinesiology conference in Seattle USA.

In contrast to Binary Muscle testing Analogue muscle testing studies dynamic muscle function. The great thing about this technique is that it is easy to do and can be utilised in any form of kinesiology.

I suspect that its uses will have far reaching effects on how Kinesiology will be practised in the future !"

I met Alan Sales in one of my workshops in England, and I was immediately captivated by his genius mind. I was impressed by his passion for his research and by his love to share his discoveries --- what a gift indeed.

Having been proclaimed by several kinesiologists already mentioned, Alan's Analogue Muscle Testing (AMT) is considered to be a quantum leap in kinesiology. The whole concept of AMT is mind blowing. It also disrupts the old ways of thinking as well as people's mindset about the entire concept of muscle testing. With AMT, Alan Sales invites us into a new world, a new paradigm that propels us into a different dimension of the body/mind circuits.

AMT is simple, straight forward and easy to learn and use, yet its potential is beyond description. The power of AMT has already proved itself, and a number of kinesiologists, including myself, have experienced far reaching results with clients.

To a kinesiology practitioner, AMT is without a doubt an information gathering tool to be treasured, and can be used alone or integrated into any protocol. All in all, with Cyberkinetics, Alan Sales has developed concepts and techniques that will surely have a great impact on the future of kinesiology.

There are no products to list in this category.